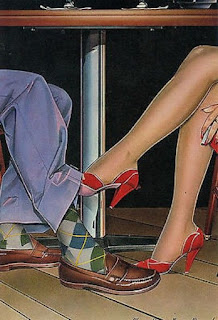 Professor Michelle McGuire of Washington State University and her husband, Mark, of the University of Utah published a crucial study that could potentially influence EPA's regulation of glyphosate.[2]    After a citizen science project by Moms Across America detected glyphosate in urine as well as breast milk of three of ten women tested, Monsanto- unsurprisingly- went on an offensive glyphosate-defense campaign to dismiss the findings- not unlike tobacco scientists publishing junk science to manufacture doubt about carcinogenicity of tobacco.

In fact Monsanto uses the identical laboratory established by Big Tobacco to this day --used by Michelle McGuire to "validate" this study.
If you scroll all the way to the bottom you'll find out about Covance previously called Hazelton--started by Big Tobacco.


Let's, please, suspend our well-founded disbelief & give authors benefit of doubt nevertheless- let's check the veracity of author's remaining claims to see if the study's conclusions are as "scientifically sound" as the author and others like Kevin Folta ( one of the anointed science experts and communicators) claims

"McGuire and her colleagues: “our study provides strong evidence that glyphosate is not in human milk.”

This independent study used an appropriate, precise, and validated analytical method and arrived at a scientifically sound conclusion....." Civil Eats

Can you spot the spotlight fallacy? 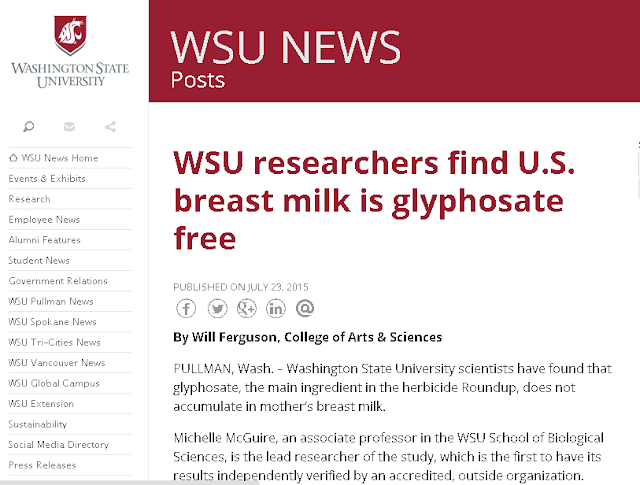 Forty-One samples from Pullman & Moscow extrapolated to fifty states of the United States of A.
Absurd!

Since the biggest determiner of organic consumer seems to be the level of education,[7] researchers couldn't have hardly selected a more appropriate group of disproportionately educated women more likely to choose organic foods then in two Pacific Northwest College towns.
It would only be facetious to say that women were recruited in a Whole Foods parking lot-- mainly because there aren't any in Pullman Washington and Moscow Idaho.
For the sake of argument suppose milk was glyphosate free as the authors claim. It would support that a small number of  predominantly white educated mothers in two college towns in Pacific Northwest-- most likely to buy organic--didn't have detectable glyphosate levels in their breast milk.  Uneducated women were unlikely to be selected. Neither were Black, Hispanic, Asian and other non-Caucasian minorities, nor the segment of the population most at risk--farmers.
Does the study provide evidence to conclude glyphosate is absent in breast milk of women not represented in this sample- populations at highest risk of glyphosate exposure- farmers, farm laborers, poor, uneducated people?  Of course not! Not even in the cities of Pullman and Moscow, never mind the entire fifty states.
So apart from the fact that a study of mere 41 samples is ludicrously statistically underpowered,  it was a  non-random unrepresentative sample. And since sampling bias wasn't accounted for and the sample size is statistically trivial --  failure to detect glyphosate could be a false negative, erroneously attributing the failure of detection to lack of bioaccumulation instead of the underpowered sample, technical difficulty and the biased method of sampling.
Although detection method used (HPLC- MS) [6] is precise, a study failing elementary statistical principles, suffering from selection bias, can not draw sound scientific conclusions.

So, statistical methodology was not "appropriate" or "precise"
Was HPLC-MS methodology  "validated"?
This study describes isolation of glyphosate from milk using very sensitive and precise techniques: High-Pressure Liquid Chromatography in tandem with Mass Spectrometry, but  even if it wasn't  designed by Monsanto scientists with conflicts of interestit is  prone to technical, experimental and human error

Milk is a complex fluid (matrix) composed of  water, lipids, proteins, carbohydrates and is thus it is more difficult to detect glyphosate in milk--which requires dilution--than in urine,  reducing the sensitivity of detection greter than ten fold. In fact, Michelle tacitly admits  her HPLC-MS glyphosate  detection method in  milk is ten times less sensitive than in urine, by not contesting it in the conversation below.


Analytical method was verified how?

If detection method developed for milk by Monsanto scientists were  accurate, and glyphosate was indeed not detectable in the milk--  the simplest verification method of  absence glyphosate in milk is assaying urine of babies nursing on sampled mothers.
Failure  of detection glyphosate in the urine of babies who nursed on the tested, and ostensibly negative-glyphosate  milk with a more sensitive detection method, would validate the milk methodology.
Remember--glyphosate detection in urine is ten times as sensitive as in milk?
But urine detection test in babies wasn't done!
Instead, validation of the method of detection rests on the independence and legitimacy of an "outside accredited organization"

Who is the accredited independent Organization that validated Michelle McGuire's methods?

Covance was associated with the Council for Tobacco Research and conducted animal testing for tobacco companies. Covance has a sordid history of chronic egregious animal abuse that includes "Striking, choking, screaming and cursing at "uncooperative," frightened and sick monkeys.Slamming the head of an escaped monkey against concrete. Injuries left untreated until they became necrotic. The Broken arm was untreated for 4 day.

Apart from the unbelievable cruelty and unforgivable inhumanity, this  "outside accredited organization"  was cited for lack of employee training and supervision, uncertified employees anesthetizing animals, knowingly using unhealthy animals in studies,  malaria-infected monkeys still used in studies for pharmaceutical and lying about the cause of death for three monkeys found dead in their cages, and intoxicated employees performing lab procedures on monkeys.[5]

This  is one reason any arguments Monsanto's surrogates raise about animal welfare ethics  ( as were raised against Seralini's famous staudy) as well as Alison Van E in arguing against animal feeding studies based on ethical concerns,  can be immediately dismissed.

This  profit- laboratory's  income is dependent on producing outcomes  paid for- otherwise its contracts and repeat business dry up. In fact, it admits to this being the case : " ...  a company with a customer base primarily made up of manufacturers rather than healthcare providers can help LabCorp mitigate reimbursement trends..." and “As a combined company, we will be well-positioned to respond to and benefit from the fundamental forces of change in our business, including payment for outcomes" [3]


In other words, the McGuire study was  NOT verified


It would be accurate to say that the only thing a study this flawed proves is that Michelle McGuire et al failed to detect glyphosate in breast milk of 41 women from Pullman and Moscow- not a great Monsanto soundbite.


Overwhelming Majority of Germans Is Contaminated With Glyphosate


"A worrying three-quarters of the German population have in fact been contaminated by the controversial herbicide, according to a study carried out by the Heinrich Böll Foundation. The report analyzed glyphosate residue in urine, and it concluded that 75% of the target group displayed levels that were five times higher than the legal limit of drinking water. A third of the population even showed levels that were between ten and 42 times higher than what is normally permissible.
Glyphosate residue was recorded in 99.6% of the 2,009 people monitored by the study.


and adolescents aged 10 to 19, particularly those individuals raised on farms.
Meat eaters also displayed higher levels of glyphosate contamination than vegetarians or vegans".


It's impossible to know the glyphosate burden in Americans who often eat grains sprayed with glyphosate for ripening or dessication a week before harvest. Until  truly independent researchers publish rigorous tests on breast milk of women representative of US populations and particularly farmers, it's reasonable to assume that glyphosate burden is higher in the United States producing vastly more glyphosate-resistant GMOs than Germany. [4] 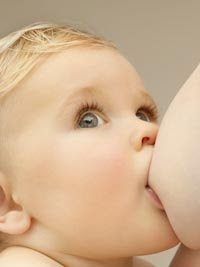 @kevinfolta @beachvetlbc Of course I agree with Kevin! Your comments are childish and uninformed. I do not respond because you just harass.
— Shelley McGuire (@Nutr_Prof) April 10, 2016

Bottom Line: Considering the outrageous deception in just this one vignette in decades' long public disinformation campaigns -if you are breastfeeding, which all experts recognize as crucial to babies' wellbeing-- it's safest to stick to organic.

[1] Michelle. If I am so childish why does the discussion section of your paper listing limitations of your study echo my criticism?
[2] Civil Eats. Is there glyphosate in breast milk?
[3]  LabCorp's Covance Deal
[4] Greens Warn Breast Milk Unsafe
[5] Covance Labs- Tobacco Portal
[6] HPLC-MS
[7] Who buys organics?

Posted by beaachvetlbc at 10:32 PM