In Monsanto Politics Part I   called Microbiome Mayhem,  I wrote about Kavin Senapathy whose piece in Forbes was promoted on Twitter by Jonathan Eisen and Elizabeth Bik. All sarcasm aside, Jonathan's very first response to my comment signaled explicit GMO partisanship and favoritism of Kavin- Monsanto's messenger.  The one featured on Monsanto's blog.

@TBCMicrobes yes, I was being sarcastic in response to a person who claimed degrees were all important https://t.co/pt1YVmHzhx

The state of California where he resides thinks degrees are important or Jonathan would be performing surgery on you.

Jonathan's  argument, the pinnacle of absurdity is that it's arrogant of me, a licensed medical doctor, to dismiss Kavin's science illiterate medical advice.  At a minimum, entirely unequal in the eyes of regulatory agencies- if he wants to debate it, he needs to take it up with Federal and State licensing authorities who did not issue them a medical license, obviously with very good reason.

A super quick lesson in Microbes

Minimum inhibitory concentration (MIC) is the lowest amount of drug to affect microbes. The most basic microbial test- a laboratory measurement of the activity of an antimicrobial agent against a microbe.


Why is MIC of glyphosate important relative to GMOs?

An MIC of glyphosate for a beneficial bacteria interpreted with glyphosate bodily fluid levels in animals or people- will inform whether glyphosate is present in quantities sufficient to cause  microbiome imbalance, and disease! 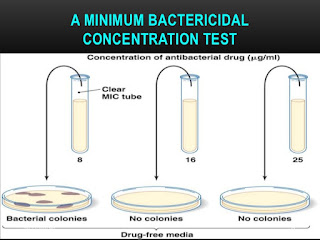 MIC is a test that tells us how much/ how little antibiotic is needed to kill bacteria. Medical doctors request it on an a daily basis to avoid using the wrong drug and to prevent antibiotic resistance, as well as unnecessary expenses and prolonged suffering if we blindly pick the wrong antibiotic to treat infections.

I've been asking for this test from biotechnology advocates on social media for glyphosate for almost a year.


@kevinfolta @AlwaysaScouser Asked u for study on glyphosate s (antibiotic) effects on O. formigenes in Apr. Do you have one, by any chance?
— Dr. Ena Valikov (@beachvetlbc) May 28, 2015

"The death of expertise is a rejection not only of knowledge but of the ways in which we gain knowledge and learn things. Fundamentally, it's a rejection of science and rationality, which are the foundations of Western civilization."

"...collapse of any division between professionals and laymen, students and teachers, knowers and wonderers – in other words, between those of any achievement in an area and those with none at all.

By this, I do not mean the death of actual expertise, the knowledge of specific things that sets some people apart from others in various areas. There will always be doctors, lawyers, engineers, and other specialists in various fields.

Rather, what I fear has died is any acknowledgement of expertise as anything that should alter our thoughts or change the way we live" [...]


Eisen Quotes will be in blue.

Eisen, who calls himself a “Guardian of Microbial Diversity” :
(not megalomaniacal at all)

But, didn't he just support a Monsanto blogger criticizing doctors?


I am not sure why Jonathan can't see that he contradicts himself, but he made my brain explode. Quick, where is the extra strength aspirin-my hypocrisy meter just blew a fuse. 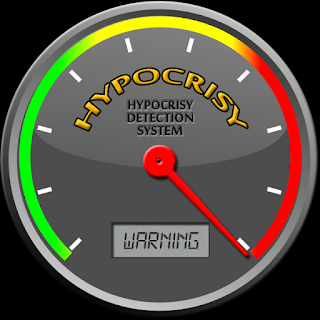 Jonathan's  testimony on glyphosate to scientists:

Telling detail: " NO evidence of a direct effect of glyphosate on the human microbiome." 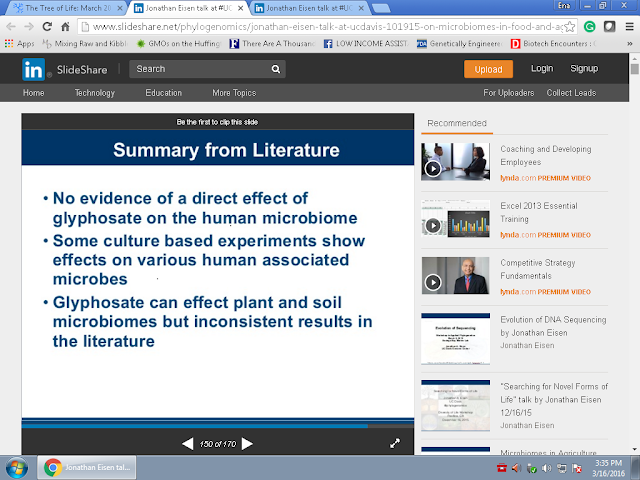 
1. "I can't  cite ONE simple microbiological test (MIC) evaluating glyphosate's inhibition of even ONE! of numerous commensal microbes with crucial function in humans or animals", as I just clearly showed.

2."I have NO studies comparing the microbial diversity of animals or people relative to the different level of bodily fluid glyphosate levels, which no one is measuring"

Jonathan appears to be collaborating with weed scientists, among other well known GMO activists rather than medical or biosafety experts.

In spite of the fact that many are alarmed about glyphosate's deleterious effects on animal and human health, this "guardian" of his own job, primarily,  who can't post a basic cheap microbiological test for even one single bacteria already concluded that it doesn't affect human microbes-while literally and figuratively poking around in weeds.

If no one looks, harm can't be found- which is how this Monsanto preacher wants it. 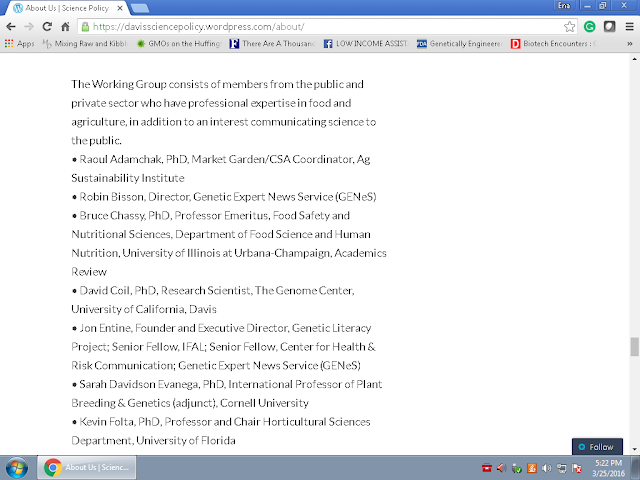 Jonathan Eisen's glyphosate research is in academic weeds  lightyears and galaxies away from microbiomes of animals and humans.

Please check our science team  - the Guardians of Microbial diversity

While Elizabeth Bik cited her completely irrelevant, academic study on dolphins, whom I adore, but a fishing trip into their guts is about as useful as Jonathan's feigned research into weeds. If you check the database he posted you'll learn he is collaborating with a weed scientist, citing primarily studies on glyphosate's effects on fungi and soil--not humans or animals.

All are purely academic!

When offered an opportunity neither Jonathan nor Elizabeth had any interest in considering microbiome questions with clinical implications to animals and people.

“I personally think the microbiome of plants and animals including humans is critically important to understand and likely plays important roles in all sorts of important functions,” Eisen explains. ”

"Because it is really complicated, it is easy for scam artists to get involved and it is also easy for mistaken conclusions to be made by the well-intentioned. But the hype is so strong that everyone is converging on the area"

"Some of those converging on the area are doing phenomenally interesting and important work.  But it is REALLY REALLY early in the field and we just don’t know what is going on in most cases.”

A lot of important work has already been published on intestinal bacteria called Oxalobacter formigenes that degrades oxalate thereby reducing risks of kidney stones and kidney disease affecting the well-being of millions of animals and people. This area of microbiome science is focused, targeted, in contrast to blind fishing expeditions into dolphin's guts.

" By and large, the scientific and medical communities seem to stress the importance of avoiding unnecessary antibiotics to protect our microbiomes and, importantly, to mitigate the real and alarming problem of antibiotic resistant bacteria, now thought to be one of the most pressing health problems in the world" 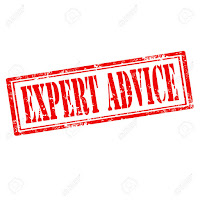 I agree [3]  After five years in the  GMO trenches, this GMO watcher has not seen Jonathan, his brother Michael Eisen @mbeisen,  or  Elizabeth Bik advocating to limit the use of the most prevalent agricultural antibiotic on the planet- glyphosate [5] -even though he admits how crucial antibiotic reduction is.  You didn't see him defending GMO advocate, Kavin, either.

Microbe guardians can't cite a basic microbe test--the sensitivity of even ONE commensal beneficial microbe to glyphosate, a patented antibiotic.

About other beneficial commensal microbes-- what's the minimum concentration of glyphosate that inhibits them?

With Jonathan and Elizabeth in command control, lost in the academic weeds, looking in all the wrong places- evidence of glyphosate's microbial harm will be lost by design.  Or Jonathan might be out of a job in the multimillion dollar Monsanto-funded  UC Davis genomics center [1].

Jonathan and Elizabeth  don't know and don't want to know, shielded by the walls they build to hide from clinicians like myself, whose patients suffer chronic illnesses and gut dysbiosis. As long as Jonathan is microbiome's "guardian" research into harm associated with Monanto's flagship product, glyphosate, will be blocked just like he is complicit in blocking this clinical expert.

Clinically relevant research is politically unappealing given Jonathan's position within the academic hierarchy that Monsanto pays for.


Literally a fictional prescription is the only kind any participants in this "debate" can write on a Toys R Us drug vial with a crayon.

They are all licensed to practice homeopathy but I prefer effective analgesics and their pill vial can't even contain a simple aspirin for a migraine these fine folks just gave me.

And that's not an opinion--it's a simple statement of facts.[2] 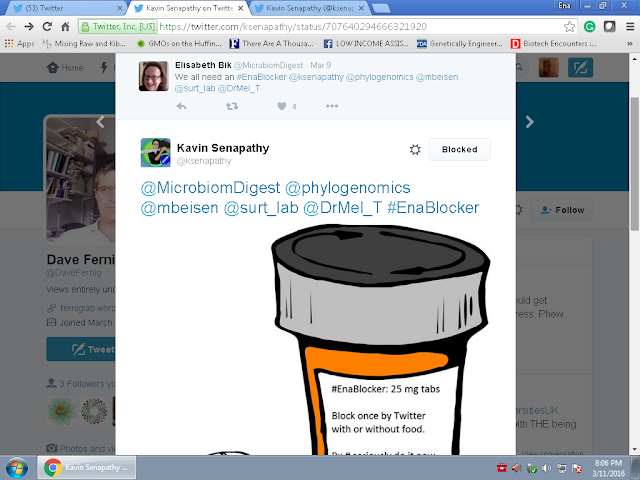 
Exactly. Soil and weeds microbiome. Not animal and human!


Are these academics good scientists?

I had worked with many PhDs before veterinary school whom I respect, and learned from many academics in veterinary school, and still do-  but Jonathan (and his brother Michael Eisen), and Elizabeth Bik's behavior prompted a question that's hasn't occurred to me before.

Science is rooted in questioning assumptions and dogma, challenging authority even at the cost of social prestige, friendships, and status. An academic career rests on networking rather than ruffling feathers.  Does keeping friends and maintaining a social network, and a nexus of power supersede everything? Is promoting an obvious fraud like Kavin and misinforming the public scientific, ethical, righteous?

Usually, when scientists work to solve complex problems they engage all experts from related disciplines, which is known as a multidisciplinary approach IF we are to prevent preventable diseases in the trenches.  Academics don't grasp that if they are to contribute Collaboration and engagement of experts from the medical community is needed.


Those of us diagnosing and treating chronic diseases in animals and humans (greater than 90% of clinicians) are disengaged from the research community. We are too busy diagnosing and treating diseases for a living to publish.  "Publish or perish" model is only relevant to academics- not clinicians. There is absolutely no incentive for clinicians to publish. Bridging this gap is important.

On social media in my interactions with some academics, I witness sophistry, sycophancy, dogmatism and an abhorrent lack of morality befitting the Catholic church when it was hiding unspeakable crimes against kids for decades.

These type of academic scientists beholden to prestige, politics, their jobs and power will never ask pertinent questions in science with the potential to improve animal and human lives.

Worse, they will watch silently and cheer on gang molestation and  intellectual rape of those who do.

When you get seriously ill and hospitalized-possibly due to glyphosate's adverse effects being covered up, and when your world starts falling apart, all these experts will be there for you. 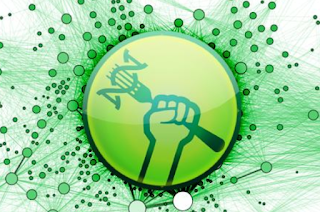 Don't forget the Babes- Food Babe,  Elizabeth Bik, Kavin Senapathy and the members of her green astroturf cult,  and Yvette, who aren't even licensed to give you an aspirin.