Conflating  insulin & chymosin (in cheese) to plant GMO is pseudoscience

Few things are quite as woo-licious as conflating completely unrelated things. We all know Monsanto's Uncle Robb loves him some chicanery, but when Uncle Robb says different things are the same, the faithful media lapdogs repeat the myth no matter how ludicrous it is.

On account of this, Chipotle was excoriated and dubbed anti-science, ostensibly because the restaurant chain failed to disclose the use of genetically engineered chymosin- an enzyme used to curdle milk in cheese making- when it announced it was removing GMOs recently.

The tidal wave of abuse, as Alternet put it, was simply spectacular. Similarly, the state of Vermont was labeled anti-science for failing to label chymosin. But when you scratch the surface of this cheesy kerfuffle, even if it sounds counter-intuitive, Chipotle is scientifically correct to call its cheese "GMO-free"-- even if, and in spite of- it being genetically engineered, as is the state of Vermont.


@RobbFraley Genetic Engineering of yeast or E. Coli to synthesize enzymes has exactly NOTHING to do with your mutants.
— Dr. Ena Valikov (@beachvetlbc) June 16, 2015


The effort to blur the differences between products of genetic modification of simple, one-celled organisms and GMO plants -the *organisms* - started awhile before the Chipotle fracas. Here you see the conflation of GMO corn with chymosin in the context of the labeling debate in Vermont.


Nachos of Hypocrisy- Just Label It!!! (unless it is something our state produces, then it should be unlabeled) pic.twitter.com/Z2IImSd3DJ
— Kevin Folta (@kevinfolta) October 19, 2014


And if  "communicators" of this unscientifically distorted message confined it to social media,  I might have overlooked it. But.... the goofballs made it personal when they took their woo-show on the road to my alma mater.
I love UC Davis, and am proud of the education I got there...indeed,  I credit what little success I've achieved to U.C Davis' high educational standards.

So, it troubled me to see UCD  students who incur astronomical debt--for what should be independent science-based education--deceived by industry tainted pseudoscientific frauds.

Amazingly, everyone misses that one of the three things on the poster is nothing like the other two, even though the two on the left are microscopic bacteria....while the third is a large plant plainly visible to the naked eye.
The bacteria ( or yeast) on the left are modified by near-surgical precision to produce proteins-  insulin and chymosin--while the one on the right is a plant whose "engineering" is akin to a blindfolded Goofy playing darts with transgenes.   I'll delve into this a little more in the second installment.

But, first, let's get some genetic engineering basics out of the way to help you picture how DNA is cut by restriction enzymes and ferried into cells using plasmids. Plasmids are DNA rings bacteria use to pass antibiotic resistance to each other, which serve as fundamental transformation vectors. They are sort of like parasitic genes replicating autonomously in bacteria ( and in some genetically engineered yeast)--without integration into the organism's genome, and thus without genomic disruption.
It matters because plant genomes- the genetic blueprints- are orders of magnitude larger and more complex compared to bacteria or yeast.

Plant transformation always involves transgene insertion into the plants' genome and consequently causes genetic disruption at the site of insertion as well as distant to the insertion sites.

Please watch and imagine the purple frog DNA is DNA that codes for insulin or chymosin.

...for now, let us count the ways insulin and chymosin are nothing like GMO plants 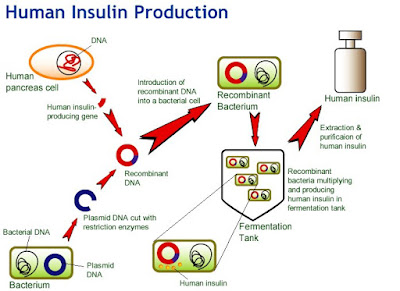 A longish explainer on chymosin- the protein/ enzyme from rennet used in cheesemaking is here.

Now, let's count the ways chymosin is different from the soybean oil producing plant on the right....

Now, during the Twitter exchange with Robb Fraley, who never uttered a word, I made a promise to explain how genetic modification of a simple organism, a bacteria or yeast-- with less than 5,000 genes,  is radically different from genetic engineering of a plant whose genome contains 35,000 genes. I will tackle that in the next installment (here it is).
RNAi GMO's are also discussed here.

2. The tobacco-peddling Dr. Gilbert Ross was one of the attackers of Dr. Oz, along with his radioactive comrades, including Henry I Miller. I infer from this that Dr. Oz is stepping on the right toes:)

3. On Chipotle's and Big Food Mafia

4. It turns out  UC Davis put on the #IFAL2015  meeting and paid journalists to attend their junket funded by BIO, a Chemical Corporate industry trade group. Hopefully, students weren't fooled by this industrial charade.
5. Blow-back for our science advocacy for science literacy, animal, and  pubic health.
Posted by beaachvetlbc at 8:04 PM