Alice in wonderland- a tragicomedy in two acts 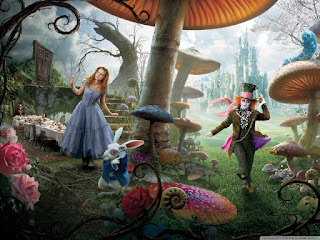 GMO skeptics bludgeoned by a consensus on GMO safety

The lies  about GMO safety are screamed by blogs, shouted by just about every newspapers' editorial board- having become  mouthpieces for special interests centuries ago- and screeched by Michael Specter, tarnishing the legendary New Yorker, Los Angeles Times, Washington Post, Scientific American....etc etc..  Every credible international and national  science organization has endorsed GMO safety-they claim- and 88% of all scientists polled insist  they are safe, in contrast to the conspiratorial  public. For when a big lie is repeated by PR minions funded by Chemical Corporate billions, it eventually mutates into pseudo truth--or so the Corporations paying off the mass media to relentlessly reprint blatant lies, thinks.

Now even my beloved Comedy Channel, a trusted friend I turn to in the mass media mental asylum, is in on the crazy and I am  disturbed that one of my favorite  comedians is peddling unscientific gobbledygook   But he is an entertainer, a comedian. So, what happens when a fundamental science question related to GMO is posed to one of these 88% scientists?

Read along and follow my little adventure- a social experiment of sorts, and you will learn how willfully illiterate actual scientists can be about biotechnology science- the 88% legitimizing a fictitious consensus on a scientific subject they have no business discussing in the first place.

We don't know whether genetic engineering produced off-target-effects common with this nascent silencing technology.
Rigorous studies have simply not been published and there isn't one feeding study showing this potato  is either safe or that it reduces rates of  acrylamide-associated cancer in any laboratory animal or human.

We have this in common with the taters, though-we too rely on asparagine to nourish our cells. An interesting factoid is  a common chemotherapy drug useful for  lymphoma in animals and people works by destroying asparagine.  Please don't misunderstand this to mean that the potato will act as a chemotherapy drug--that's not what I am saying--we don't know enough about this plant, in the same exact way that we don't know enough about the silenced apple discussed  in my previous Twitter drama here.

Without published peer reviewed studies, its impossible to tell which exact genes were silenced in the plant, or whether the short silencing RNA matches our own. But if the RNA were to match our own and was absorbed-it could, indeed, silence our genes, including potentially the ones synthesizing asparagine.   I quote a good explainer on double stranded ds RNA/ miRNA. "One fascinating aspect of miRNA is that they control 60% of the genes in the human genome. The secret lies in their promiscuity. One miRNA can bind to many mRNAs and inhibit their expression" So a fundamental preliminary question is: "does this RNA molecule get degraded in your gut, or does it get absorbed, such that it could silence our genes? ". Keep this in mind...the reason will become clear in Act II.

Spud 2. Another funny. A new study reporting presence of T-DNA in cultivated sweet potatoes which the GMO establishment would love you to believe means there is nothing different between engineering potatoes using T-DNA (tumor-inducing-plasmid)  in a laboratory and what happens in nature.   They are identical, so you can stop worrying and just enjoy the ride.  But while the study reports presence of a vector used in genetic engineering, in natural sweet potatoes,  it does not establish T-DNA as a prerequisite to cultivation, nor that it improves nutritive value, disease resistance or confers any benefit. That might explain why I'm not laughing at the comical post linked. Suppose scientists who  discovered cancer viruses in our DNA claimed people were genetically engineered by nature to carry cancer-- and then decided to infect everyone with these dandy viruses we have coevolved with, unlike GMOs -would you think they were funny or a little crazy?

Where Anti-science Anti-evidence Anti-GMO -me

asks a Pro-science, Pro-evidence, Pro-GMO -her
for
science & evidence

I wish I could say I got high on shrooms, went on a hallucinogenic  trip and dreamed it all up- except this actually happened

@arielwaldman @kevinfolta I would looove to see that study showing how dsRNA gets digested at physiologic pH. Do you have one by chance?
— Dr. Ena Valikov (@beachvetlbc) April 23, 2015

" Ariel is an appointed National Academy of Sciences committee member of a congressionally-requested study on the future of human spaceflight. She also sits on the council for NASA Innovative Advanced Concepts (NIAC), a program that nurtures radical, sci-fi-esque ideas that could transform future space missions. In 2013, Ariel received an honor from the White House for being a Champion of Change in citizen science"

@beachvetlbc here’s the @NASciences report on GMOs. I recommend reading it. http://t.co/0dquNX6yqF to be pro OR anti ALL GMOs is ignorant.
— Ariel Waldman (@arielwaldman) April 23, 2015


I am not sure if  I was supposed to  be impressed by her elite status in the science hierarchy, which I just learned about today,  or that she conquered the skill of copy & paste. Aside from that,  I  am neither  pro-GMO or anti-GMO,  having used products of genetic engineering  in my practice -recombinant insulin, interferon, erythropoietin, Neupogen- and even  ( *gasp*) genetically engineered  yeast in my younger days.


Challenging her to show me her science evidence, or as less politically correct people might say "put up or shut up", is evidently frowned upon by "credible "  elite scientists because she answers my question on digestibility of silencing RNA with a link to a large book on farm sustainability--which, by the way, doesn't hold the answer to my question. Farm sustainability  has exactly nothing to do with health and safety studies on these potatoes, though you are welcome to read the book and prove me wrong.

@beachvetlbc if you don't recognize/respect @NASciences reports as evidence, then I don't have time to hold your hand on this.
— Ariel Waldman (@arielwaldman) April 23, 2015


I certainly didn't feel any disrespect towards a preeminent science organization established on Congressional orders by President Abraham Lincoln until I  noticed that the National Academy of Sciences favorites her unfounded accusation sandwiched between insults, frank ignorance and  uncompromising arrogance. And then as I tasted the vomit in my mouth, I  realized,  that  like the majority of rusted decrepit  institutions in 'Merica, the NAS has become yet just another corrupt politician wearing a cheap suit with a logo on it.

@arielwaldman I don't need a science illiterate holding my hand. I politely asked u to post peer reviewed science. Where is it? @NASciences
— Dr. Ena Valikov (@beachvetlbc) April 23, 2015

I am certain that as a member of that 88% of scientists-- unlike an ignorant anti-science veterinary medical doctor, whose patients eat GMOs--she considers them perfectly safe, based on science they DO NOT comprehend. Ignorance is bliss!  Presumptions, prejudices and insults evidently compensate for the fact that physics scientists have absolutely no idea what GMOs are, and really have no business even having their opinions tallied  in any poll on GMO science. These polls need to carefully and scientifically measure opinions of experts in biotechnology and health, ecology and other relevant fields.

An apology and admission of ignorance are evidently also frowned upon by the 88% of  premier scientists who agreed on GMO safety- based on complete utter ignorance- and  asking questions....well, that's just completely out of the question. They can't answer any of them-don't even try.

Thus she does what is customarily expected of adults.......she hides by blocking me.

﻿Thousands of words have been written and hundreds of different pieces of advice have been dispensed by sociologists and other experts at dozens of meetings  on communication of the science of genetic engineering to the public. It just hasn't occurred to anyone that the best way might be to  politely ask questions and listen to the answers instead of hurling insults and then hiding upon making the discovery that the public might be smarter than the pseudo-experts.


Moral of the story : the famous consensus on GMO safety is as solid as vapor.


Footnotes:
1. I found the statements by the scientist in the video to be nothing more than tired and overused talking points unsupported by any evidence. There is no evidence that anti-GMO movement or regulation have hindered marketing of GMOs- there has not  been a single plant that the USDA hasn't deregulated. In fact, according to  a public interest attorney, the entire regulatory scheme is  fraudulent.

2.  The statements on BT are  patently false. Cry proteins have been reported to induce mucosal and systemic immune reactions, which might indeed lead to "leaky gut".

Posted by beaachvetlbc at 11:11 PM