Exciting Interview with Chief Executive Officer of GMOs are the Bomb, Inc 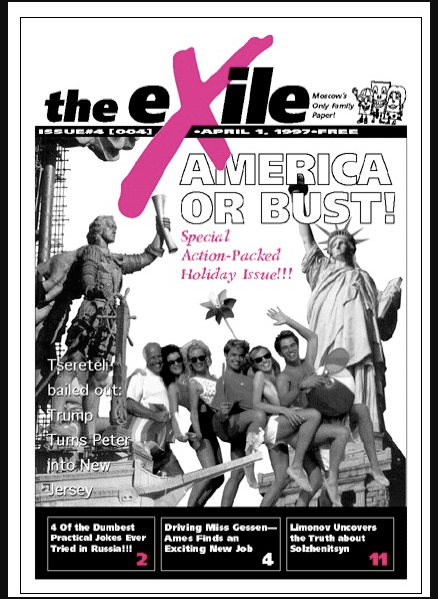 Mr. Bob Folly, the CEO of GMOs Are the Bomb, Inc., is a leader of agricultural biotechnology, awarded with the National Medal of Technology in 1998, the Mother Theresa Medal presented by the Queen of England in 2006 and 2008, the Norman Borlaug Medal of Innovation in 2000, the World Food Prize Laureate in 1993 and 1995 through 2016, and the Rachel Carson Prize for environmental stewardship for 2017. He coauthored more than 300 peer-reviewed publications. Today, Mr. Folly stopped by the Washington  Tribune to discuss  the challenges of addressing consumer concerns about biotechnology.

His comments have been formatted for clarity

WT: GMOs Are the Bomb started marketing Pesticide Ready GMO seeds in 1996, over two decades ago, yet they continue to raise consumer concerns. Why do you think that might be?

Folly: Over the decades our Pesticide Ready GMOs have been commercialized, there has not been a single food problem associated with our seeds, not even a runny nose; trillions of meals have been eaten by billions of animals and not a single problem has ever been reported.

We are frustrated that GMOs remain controversial in spite of the stellar record of transparency we  instituted and the fake news reporting how we  hide our studies behind confidentiality rules and proprietary information walls and purchase  scientists and endorsements of science institution, including the National Academy of Sciences .It is fake news you know.

I agree with my colleague, Hugh.  GMO rejection is based on privilege and elitism that's killing starving people in the undeveloped world and they should really be held accountable for human rights crimes. 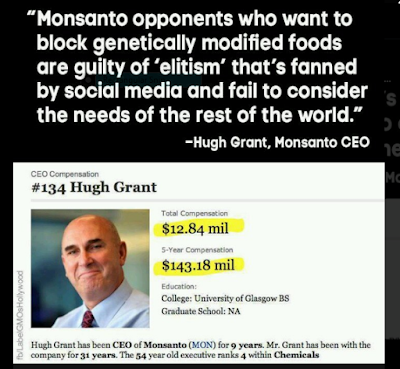 WT: Here are some recent consumer comments about GMOs I'd like to read you, Mr. Folly.


"The strong popular reaction against GMOs is due to the anti-science bias of those profiting from GMOs — hiding data, fudging data, misleading people, threatening any scientists that attempt to do unbiased research, threatening farmers who choose not to grow GMOs, etc. These GMO advocates are like kids fascinated with a box of matches in a dry California forest.


“When engineering GMOs, during the gene insertion process, hundreds of adjacent genes are inadvertently damaged. These damaged genes produce damaged proteins which can be allergenic, toxic, or carcinogenic  — a dangerous game of Russian Roulette.

“In addition, GMO produce is doused with large doses of pesticide  — more and more each year as weeds become resistant. Glyphosate (Roundup) is now found in the urine of the majority of Americans from the food they eat, and glyphosate has recently been found to be carcinogenic. Records uncovered at Monsanto show they knew about these carcinogenic properties decades ago but there was money to be made.

“Personally, I suffered several chronic health issues (digestive problems, allergies, brain fog, low energy, frequent colds and flus) in the 2000-2010 period. Then I took a 30-day non-GMO challenge in 2011. For 30 days I ate no GMOs and only ate organic food. Within 3 weeks my chronic health issues disappeared and I turned that 30-day diet into a permanent diet. It was life-changing. Now the only time symptoms return is when I eat that crappy food in restaurants when on vacation."

Folly: We are on top of it, don't you worry. We recognized the need for a team of special communicators to improve consumer understanding and organized the GMO are the Bomb Education Response Teams ( their skills in copy-and-pasting exact quotes from our manuals  with authenticity flourishes for our profit's sake is outstanding)

We screen them for ability to (never) think independently (and then we refine their ignorance).
So, it is just a matter of adding a few more members to our Communications Teams and all these consumer concerns will be erased, I mean addressed.

GMOs are the Bomb University is very competitive — we only accept the most enthusiastic and passionate. In fact they are often more passionate than we are about the immutable safety of the GMOs we design (to sell our invariably safe pesticides).


WT: We interviewed a veterinarian who claims that GMOs have not been proven safe.
How can she possibly say that when they've been eaten by billions of animals.
Don't dogs and cats eat a lot of GMOs?

Folly:  No. Never heard of her.

Thought bubble: (vets have all kinds of sophisticated toys to detect and document organ damage. Ultrasounds to peer into and measure animals' insides and endoscopes to crawl down intestines and other plumbing,  and to top that off  harvest biopsies of many organs that  GMOs have never possibly in history caused any damage to.... by any conceivable mechanism!)

Oops, so sorry...where were we? . There have been no studies published in veterinary or human medical literature, none discussed at any medical conferences because clearly our GMOs are that safe.

WT: This vet has  been writing about some bacteria that glyphosate could be suppressing that could be predisposing animals to bladder and kidney stones. She says after several years of asking questions of Monsanto friendly scientists, none provided the answer- a cheap three day test called MIC.

Folly: Well, we have that under control, we already took care of it.

Our conclusion is that kidney stones in animals and people are caused by PH  alterations which have  nothing to do with (the extra oxalate adjuvants)  glyphosate which has no effects on kidneys or kidney bacteria, so we don't need to do her three day test. 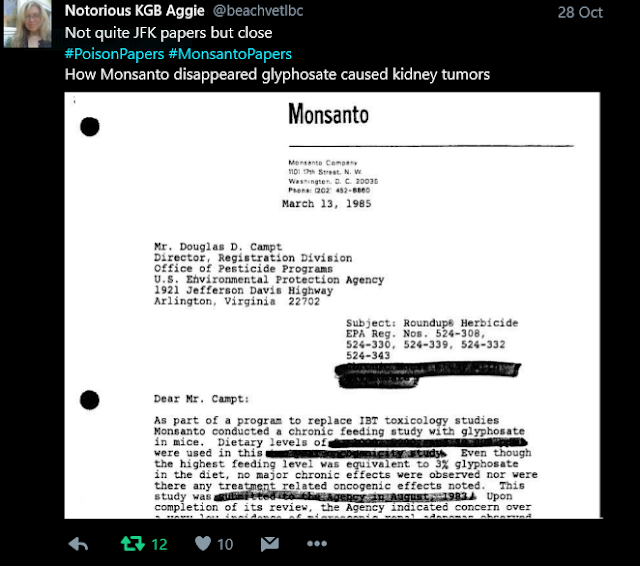 But all those  social justice warriors are such courageous warriors they will surely stand up for her.


WT:  I heard GMOs are not discussed in any veterinary or human medical literature or professional conferences and most clinicians in veterinary and human medicine are unaware of them.  Without data collection and research on pets whose diets are composed of significantly more GMOs than human diets, I am not sure that claiming that GMOs are safe for pets-- never mind humans--
is very science based.

Folly: No data to squabble over is about the level of scientific rigor we like.

WT: What do you say to those who claim that absence of evidence isn't evidence of absence and that GMO Advocates don't understand secondary effects?

Folly: That's just another way to say that since there are no long-term blinded clinical trials — randomized life-long feeding trials  — that we are relying on the power of false negatives. And it is a negative, for sure.

This is going on my office door pic.twitter.com/pQOEJWvt0E
— Jay Van Bavel (@jayvanbavel) December 10, 2017


WT: I am glad you mentioned blinded clinical trials and RCT.  because it appears you understand the framework for scientific evaluation and hierarchy of scientific evidence, according to which the safety literature primarily composed of 90-day rat trials and opinions of the science institutions falls on the bottom of the pyramid of evidence.  GMO advocates haven't appeared to climb the mountain of evidence to prove they haven't caused harm in independent long term randomized blinded clinical trials.

There are no cohort studies, no case control studies, and due to heterogeneity in parameters, methods and standards in a body of science skewed heavily towards  short term pilot studies on very small number of experimental animals as well as predominance of  industry studies.

Thus it would be enlightening  to ask a committee of independent medical experts (in collaboration with internal medicine experts in animals, since most are conducted on animals) provably free of any conflicts of interest -- like the Cochrane Collaboration with a One Health Component--  grade the strength, weakness and limitations of the available GMO safety evidence and review the level of possible industry or other, ahem, bias. The Evidence Based Medicine Model.


How do you feel about it, a Cochrane review on GMOs, Mr. Folly? 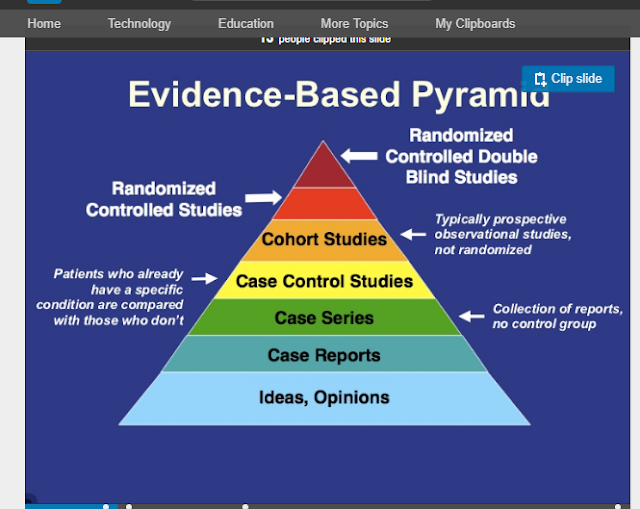 Folly: Well, that's a little silly. Food isn't medicine- drugs are- and there is absolutely no mechanism identified  in the most thoroughly researched (by us) drug, I mean food,  in the history of science. -- The process of genetic transformation using CaMV viral promoter, bacterial transgenes and  terminators inserted ever so precisely into a plant -- which could possibly lead to any harm.

WT: But aren't there therapeutic diets for kidney disease, for example commercialized since the 50s called Hills Science Diet ...can you really say food isn't medicine when our pets have been therapeutically treated with prescription diets for decades? I am sorry, did you say these transgenes were inserted precisely? ...I read they insert completely randomly.

Folly: Hmmm. These are the most  deliberately precisely modified and rigorously tested plants in history of all of science! We are certain of it, and our (confidential proprietary) studies prove it -- you'll just have to trust us on it. (And besides, it would take a very long time and a lot of financial resources to trace those crazy things people are scared of  to our GMOs.) 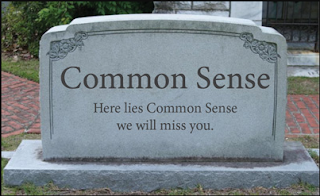 They reach out to consumers winning hearts and minds of those in the middle,  promoting public science (i)lliteracy and building understanding and trust....
(through a variety of front groups, several movies, many seemingly independent blogs  we ghostwrite for them at several very experienced Public Relations firms. The best PR firms our millions can buy situated in Washington for lobbying ease! It took over fifty years for the public to catch up with tobacco scientists, and we learned a lot from them. Now you see why GMOs are the Bomb?)

WT: What do you say to the consumers who are still uncertain about their safety?

Folly: We hope people are smart enough to realize you can't believe everything you read on the internet.

(And so we say: "Don't let the images of cyclopic pigs, monstrous rat tumors and hermaphroditic frogs scare you! This is all a normal part of the process.")

WT: What about the fact that some college-educated members of the public claim your Response team consists of science-illiterate sockpuppets and trolls?

(The vast majority of  science and agriculture advocates selling our safer-than-natural-food GMOs and pesticides on social media are like clean slates, having at most achieved intermediate or undergraduate degrees without honors. And of course, most are anonymous and thus completely unaccountable)

Folly: Unfortunately, we find it challenging to engage graduate scientists to promote our (safer-than-any-natural-food-ever eaten) GMOs and crop protection products (because most value their reputations) but we are working on it and there is no truth to the claims that we hire trolls in spite of  all the Fake News you read.


I'll be honest with you. If it wasn't for the pathetic state of journalism in this country we might find it challenging. Without influence seeking, self-promoting, opportunistic, science illiterate lazy journalists we would have a much more difficult time confusing the public about GMOs.

Only person I have 2 show my degrees are my employers for the job I do which requires them,not some pejorative harpy pic.twitter.com/MoAhzhI8T4
— HerSuperiorAggieness (@MGigger) June 26, 2016

WT: Thank you very much, it has been my pleasure! Just one final question, if you don't mind
If GMOs are the Bomb, why do farmers commit suicides at five times the rate in general population and twice the rate of military veterans?

Folly: That is incredibly tragic, but we are absolutely committed to farmers and our beyond reproach mature and responsible approach to dicamba roll out  this year proves it!  And while I appreciate an opportunity for this interview, I must say, you have been exceptionally challenging. Thanks

WT: Thanks for taking the time to talk to me. I appreciate it, very much 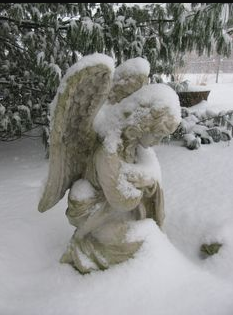