The debate about gmo safety is over! 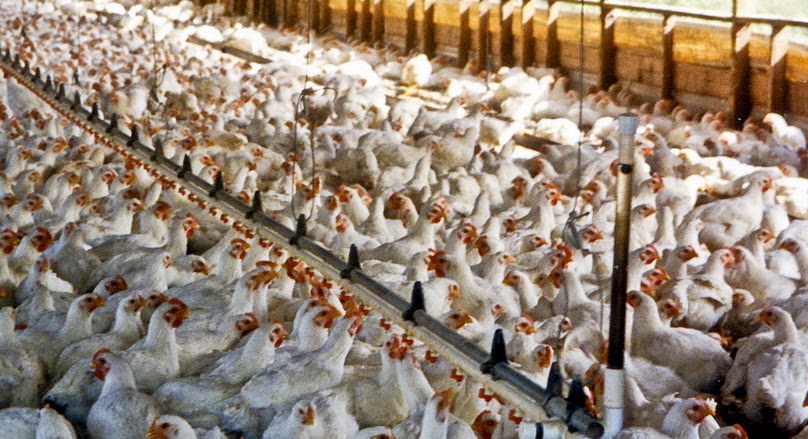 At the beginning of September, I met Kevin Folta, a plant scientist- who has taken an active role on the internet educating the public about  GMOs.. We talked about GMOS science over lunch and as the scientist was getting ready to leave  mentioned that a new study was about to be published on GMOs involving BILLIONS of animals. BILLIONS of animals!

-- I couldn't even imagine the reams of paper required to assess the health of BILLIONS.
But....within a day the study popped up on Twitter and the charade began.

As it turned out the new data fit on just a few pages.

Here is a link to the study

The author.
What happens when 100 billion animals, over 18 years, eat GMOs? http://t.co/GScfLlbhhc via @GeneticLiteracy


This is poultry whose natural lifespan is about 5 years, slaughtered at less than 49 days of age. So, even if the study reported convincing health data, it would remain a very short term study. In other words, it is 19 years-worth of 49 day old chickens, which is quite different than 19 years of life-long animal studies.

The "study" is a hodgepodge of livestock production data  used to bolster the safety alleged from a literature review. The rest is  polemics on international harmonization, with a particular emphasis on Ukraine. The author is making a case for "harmonization" -- actually, code for take-over of Ukranian agriculture by international corporations- Monsanto, Dupont, Cargil
--concomitant with  the relaxation of already outrageously unacceptable, crude and  inadequate safety testing standards.

The author recommends elimination of the 90-day rodent feeding trials- described  as "interference in risk assessment based on pseudoscience",  as well as  the long-term studies  " due to additional time, expense and animal experimentation." .

What one expects to see in animal health studies

The "data" for nearly 95% of the "animals"  summarized in Table 4 and  Figure 2 reported by the Chicken Council- a poultry industry trade group- hardly a source of medical quality scholarship.


Unsurprisingly, what I actually found


Poultry statistics are used to prove the following hypothesis:  " It would be reasonable to hypothesize that if animal feed derived from GE crops had deleterious effects on animals consuming GE feed, then animal performance and health attributes in these commercial livestock populations would have been negatively impacted"


Joint disease is common in poultry, for example, because of selection for growth--but would be devastating for humans.

It should be  intuitively obvious by now that  even if  medical tests were reported--wholly absent from this study they are entirely meaningless to any animal other than a 49-day old  broiler chicken, never mind a human. And there are reasons chickens aren't EVEN used in preliminary testing of effects of substances on humans--they are a very poor model for human health.

The remaining 5% of the animals in the data set are dairy cattle and beef cattle. The authors cobbled  together arbitrary unrelated data -somatic cell counts, and  condemnation rates,  from  disparate sources,  and when data wasn't available-simply made it up.

Data for 1994 (before GMOs)  was collected  from National Non-Fed Beef Quality Audit--but these animals do not spend  time  in  feedlots and so are pasture raised and aren't fed GMO corn and soy.

The only definitive data was for 1999-2002, even if condemnation rates were associated with animal health, but they aren't. Speed of slaughter lines and the number of assigned federal meat inspectors whose numbers have been dwindling. affect condemnation rates which do not substitute for proper post-mortem analysis with histopathology.

Somatic Cell Counts  --indicator of mastitis-breast infection in dairy-are reported for a 1995-2011, thus, there is no data "before GMOs" and condemnation rates for 1998-2006, after the introduction of GMOs.  Moreover, SCC can't differentiate mastitis due to good/ poor animal health resulting from impacts of GMOs  on health from  hygiene,  milking equipment sanitation or antibiotic use. These confounding factors make the association of this test with GMOs spurious.


Meanwhile, veterinary health data has been collected by the FSIS and it shows remarkably high rates of malignant lymphoma in livestock.

But appropriate data was only collected for five years:  1998-2002. So there is no long-term data useful in analyzing long- term impacts of GMOs on livestock health. 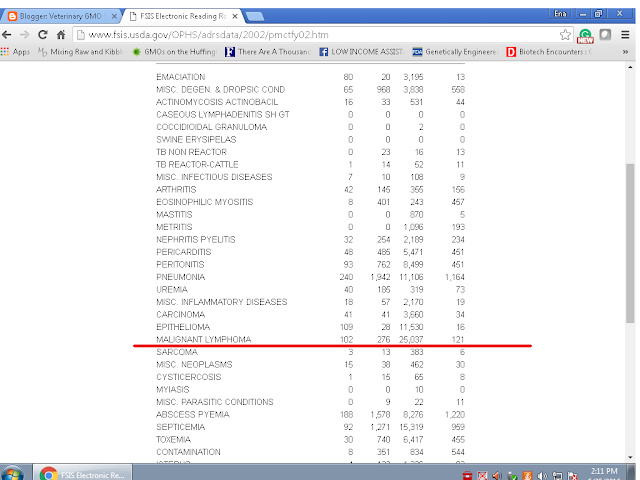 Most of the text focus is on  international trade rather than science- more appropriate for The Wall Street Journal or Forbes, rather than a peer-reviewed journal.

A Hypothesis is conventionally articulated in the abstract, expanded in the introduction, and the remainder of a journal article usually describes materials and methods  used to prove the hypothesis. Then, we expect to see results and an explanation of results in the discussion section.

None of these are found in this study- the Methods and Materials section doesn't exist, while the hypothesis itself is hidden on page 10 of the introduction: " It would be reasonable to hypothesize that if animal feed derived from GE crops had deleterious effects on animals consuming GE feed, then animal performance and health attributes in these commercial livestock populations would have been negatively impacted"

Given the glaring gross science  ineptitude,  promotion of  exceptionally poor scientific standards, the obvious bias and  explicit agenda to force GMOs into war-torn Ukraine & European Union, I felt reading the author's lengthy science illiterate opinion on GMO safety literature to be a  complete waste of  time.

Quite unsurprisingly- the body of solid work by Manuella Malatesta  demonstrative of hepatic and pancreatic harm by GMO soybeans, which were reversible on cross-over analysis,  were dismissed- while  flawed studies and a flawed review (Snell et al) that purport not to show harm were accepted.

The Snell et al review cites  Monsanto's own  short-term studies  actually suggestive of  kidney and liver harm induced in rats in under 90 days, as well as other studies reporting kidney damage and other forms of medical harm caused by GMOs.


Livestock health has improved since the introduction of genetically engineered crops...TRILLIONS of meals show no harm to animals or humans!

There is no precedent for using  livestock production as a proxy for animal or human health--an outrageous claim--but so what--Tweeterverss explodes in a convulsion of GMO celebrations.


Livestock health has improved since the introduction of genetically engineered crops. http://t.co/zfGjzFcoXa #GMO


The Debate About GMO Safety Is Over, Thanks To A New Trillion-Meal Study http://t.co/ofN99kCrxw
— C. Michael Gibson MD (@CMichaelGibson) September 18, 2014

The hype circled the globe reaching Russia within ten days.

Conclusion
This study purported to show lack of harm from GMOs to billions of animals-  majority of whom were 49 day old chickens-- while the GMO propaganda machine wildly exaggerated this substandard pile of bovine manure to also mean lack of harm to people- even though he study doesn't cite any traditionally accepted medical tests employed to evaluate animal or human health.

The author bound arbitrary, incongruent  livestock production data with spit, bailing wire and zip-ties,  to arrive at a predetermined conclusion that GMOs do not cause harm bound with an explicit hypothesis on"harmonization" of Ukraine (with our embarrassing junk science standards) that are oh, just coincidentally  made possible by overthrowing a democratically elected sovereign government and installing friends of Western Corprations--Monsanto, Dupont, ConAgra grabbing prized black Ukranian Farm Land.


Ukraine has historically been Russia's bread basket. Russia criminalized the sale of  unlabeled GMOs imposing a ban on their cultivation. Meanwhile, the new Western-imposed junta government in Kiev hurriedly passed laws to ease entry of GMOs into Ukraine, as well as using it as a backdoor into Europe. While Ukraine is in the midst of a civil war, it is a perfect target for deregulation of GMOs, which the author expresses cloaked in the language of "harmonization".

Posted by beaachvetlbc at 4:08 AM