"There is a purpose for everything under heaven"

What purpose is there to them....can you think of any?

As a vet, the first thing I think about is the misery they cause known as FAD. Veterinarians recognize FAD (flea allergic dermatitis) by the way it looks and by the location of the itch and the skin sores--typically the rump, the tail, inner thighs and groin.

If your pet  has FAD, I recommend scheduling a consultation. The intense itching causes skin infections, which will get worse causing your pet misery, and  need to be treated--usually with anti-inflammatory drugs, medicated baths and antibiotics. They will not get better on their own

Since I haven't been able to get God on the phone... unlike other people ,I don't have her on speed dial, so can't ask her why she created fleas-  I will dedicate the rest of this post to figuring out how to best wage war on them  ...as efficiently and quickly as possible.

Fleas do not live on dogs or cats--you are only seeing the fleas  having lunch! 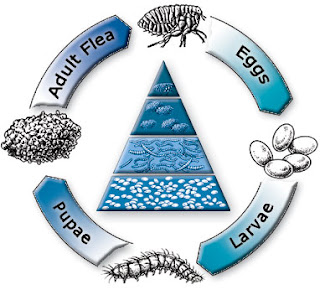 this image is courtesy of Google image search engine, beachvethospial does Not claim any copyrights

Think of fleas seen on the pet as the tip of  an iceberg....for every flea sucking blood from  your pet, there are thousands  laying eggs, hatching into larvae in hospitable  warm environments in bedding, furniture, carpeting and outside.....multiplying below the surface.
Ewwww!

Step 1> Environmental Control.
If you can see fleas scurrying around on your pet and can afford to hire an exterminator, do!
If not, purchase flea bombs with insect growth regulators (IGR's) to avoid having to retreat the property once the eggs  hatch maturing to larvae & pupate, starting the infestation cycle again a month later.

There are products considered  nontoxic--such as borate, which desiccates the buggers.

I find Advantage, whose active ingredient is imidacloprid ( a nicotine analogue) generally very effective, so long as it is used properly --every 3 weeks; or Advantix on dogs only- monthly.
Advantage Multi contains imidacloprid and an additional ingredient useful as a heartworm preventative, broad spectrum dewormer and occasionally for treatment of sarcoptic mites.

Therefore it is not advisable to apply these spot-on's the day the pet is bathed; because the oils have been stripped off by the shampoo.  Wait at least a couple of days after a bath before applying them.

I do not find garlic effective, and high doses are actually toxic to cats and dogs.

There are reports on the internet associating Comfortis with seizures. My understanding is that combining Comfortis with high sustained doses of ivermectin  ( as a treatment for mites) can lead to seizures due to summation of action on the GABA receptors in the brain.


We recommend  the owner use what works for their pet--there are likely local areas where fleas have developed resistance to some products and not others; keeping in mind that no product used on any pet will rapidly reduce an environmental infestation.

Step 3> Repellent
Advantage or Advantix will kill the fleas, but not before they've had a chance to suck blood. In the process of biting the pet, fleas introduce their own saliva containing protein. Though these topical spot-on's do kill the fleas- it is not soon enough to prevent flea allergic dermatitis (F.A.D).
I find spraying a washcloth with a good repellent pyrethrin product ( I like Ovitrol)  and wiping down the skin areas where fleas tend to get on the pet ( the rear) at least once weekly, helpful in creating a "shield" - repelling the nasty things.

Very important: do not use Advantix on Cats!
It is highly toxic to them causing tremors, seizures and death.
We managed to save one of two kittens last week, whose owner mistakenly applied Advantix for large dogs on. Only the larger of the two, a  black and white named Moustache made it after spending three days in intensive care.

Here's another mystery of nature:  No one knows why they do it.....

yet each fall ........thousands of starlings dance in the twilight above England and Scotland. The birds gather in shape-shifting flocks called murmurations, having migrated in the millions from Russia and Scandinavia to escape winter's frigid bite. Scientists aren't sure how they do it, either. The starlings' murmurations are manifestations of swarm intelligence , which in different contexts is practiced by schools of fish, swarms of bees, and colonies of ants ..As far as I am aware, even complex algorithmic models haven't yet explained the starlings' aerobatics, which rely on the tiny birds' quicksilver reaction time of under 100 milliseconds, to avoid aerial collisions - and predators - in the giant flock. Despite their tour de force in the dusky sky , starlings have declined significantly in the UK in recent years, perhaps because of a decline in suitable nesting sites. The birds still roost in several of Britain's rural pastures, however, settling down to sleep,(and chatter), after their evening ballet ..Two young ladies were out for a late afternoon canoe ride and fortunately one of them remembered to bring her video camera. What they saw was a wonderful murmuration display , caught in the short video - URL is below . Watch the variation of color and intensity of the patterns that the birds make in proximity to one other , and take a look at the girl in the bow of the canoe watching the aerial display .. What an incredible event to witness ! !

Posted by beaachvetlbc at 9:56 PM

Email ThisBlogThis!Share to TwitterShare to FacebookShare to Pinterest
Labels: flea allergic dermatitis, getting rid of fleas