Teaching case for wanna be veterinarians.

If you enjoy figuring out  veterinary medical puzzles, we have a treat for you.
We will give you a chance to test your medical skills.
Answer the questions honestly, and don't peek at the answers.
There is 15 available points if you answer all the questions correctly. 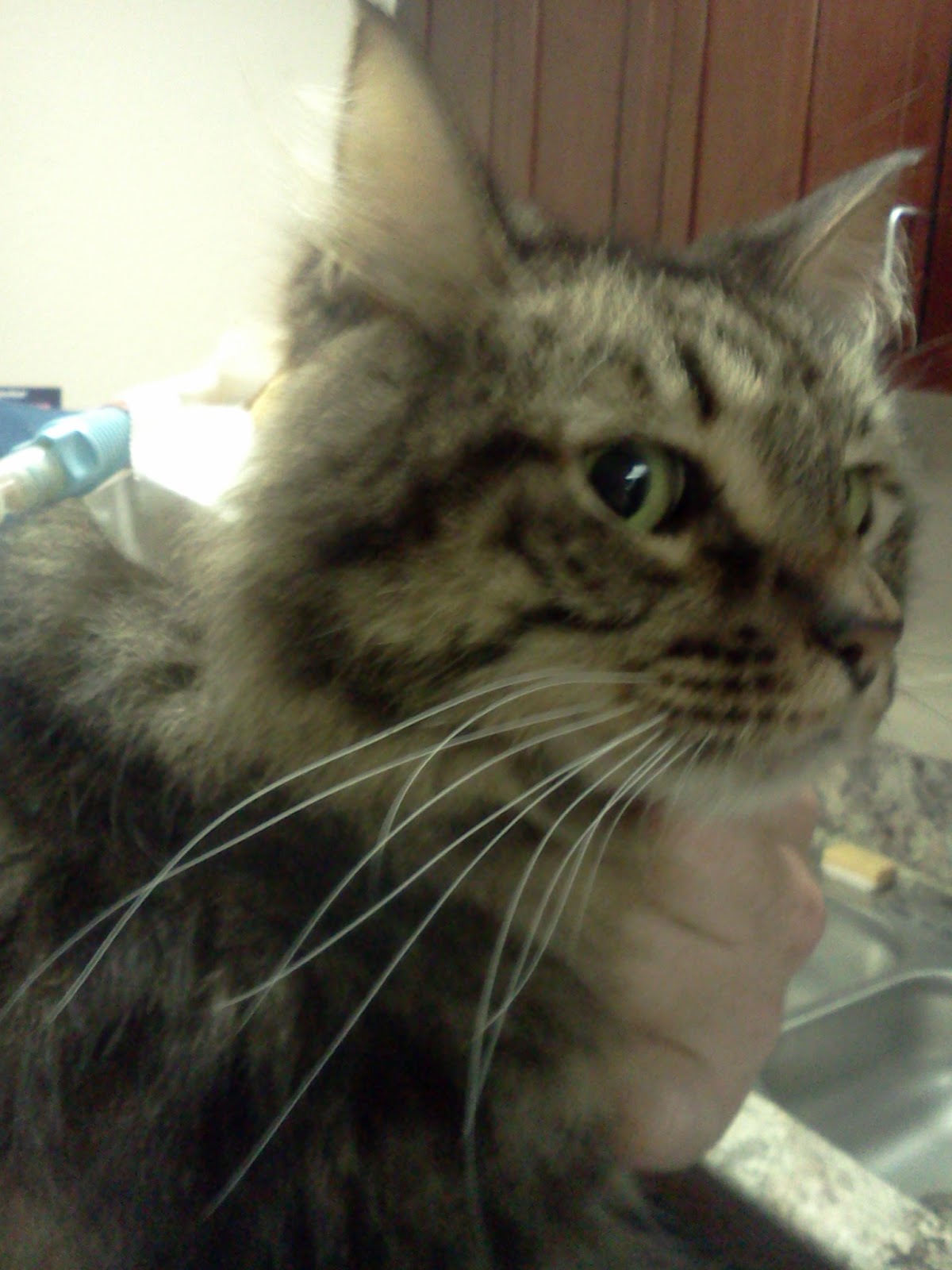 We met Vinnie  on September 26th.  He is a 9yr old  neutered male indoor-only Maine Coone who had been overweight all his life.

Weight loss of  3-4 weeks duration.
Complete loss of appetite for three days, vomiting for a day. 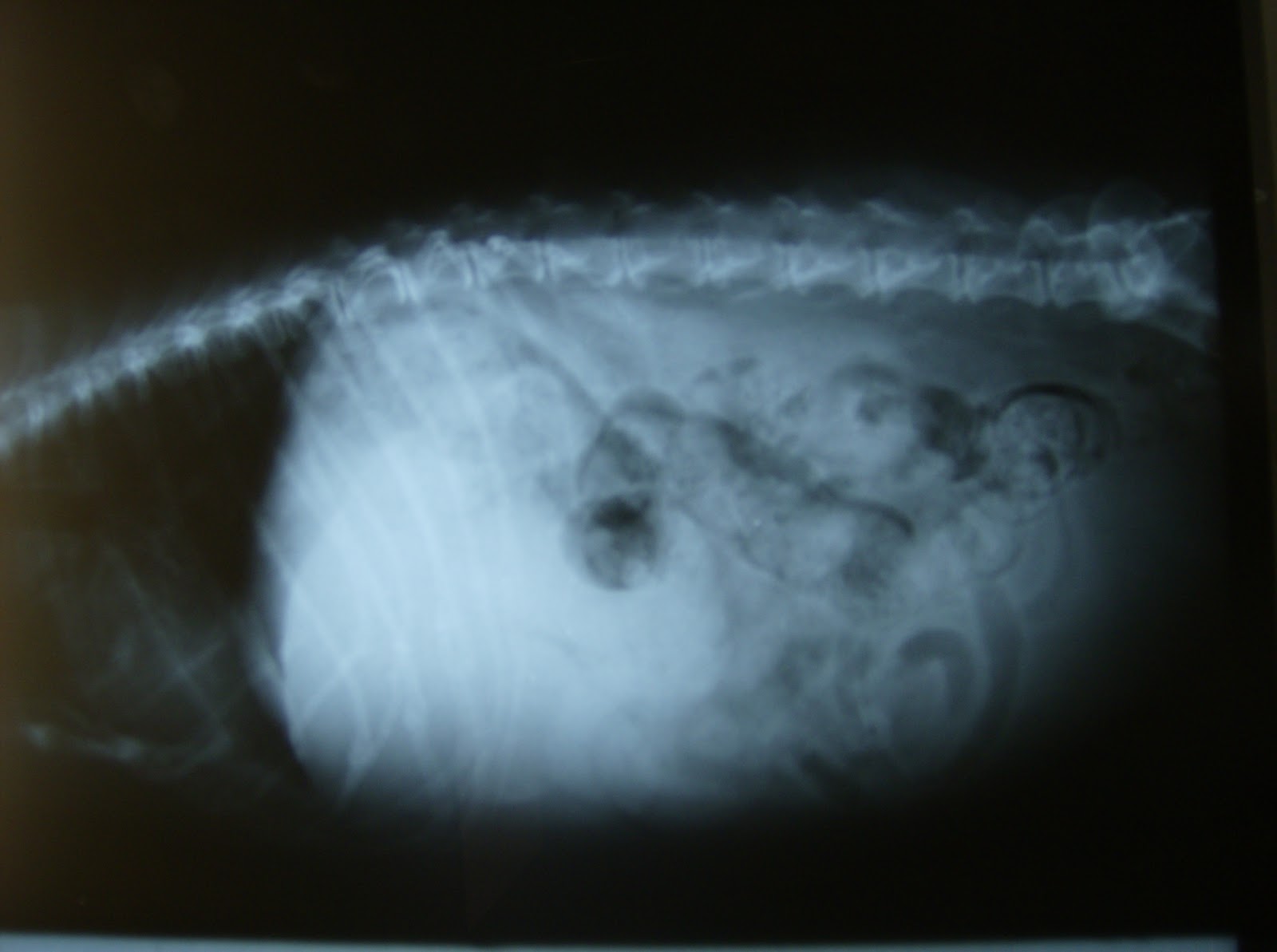 Give yourself 2 points if you answered c) blood test + urinalysis and scroll down to read the results.

With what you know so far about Vinnie and with these lab results do you suspect that he has:

Elevated alkaline phosphatase, a liver enzyme indicative of damage of the cells surrounding the bile ducts.
Elevated bilirubin is a marker of jaundice (yellowing of skin and gums), but unfortunately it takes a marked elevation and advanced disease for the skin to become obviously yellow.
Bilirubin in blood ( bilirubinemia) and

Bilirubin in  urine ( bilirubinuria) confirm that Vinnie was suffering from  hepato-biliary disease.  In cats, unlike dogs, any bilirubin in the urine is abnormal.


There are other causes
of elevated alkaline phosphatase : such as rapid bone turn-over in young growing patients,
as well as elevated bilirubin : hemolysis
you can read about here ---> http://www.vetmed.wsu.edu/cliented/lab.aspx


In determining the likely origin of elevated tests we look at the "whole picture"--the entirety of all the tests and the clinical picture of the patient, to arrive at the most likely cause.

What test would you order at this point? 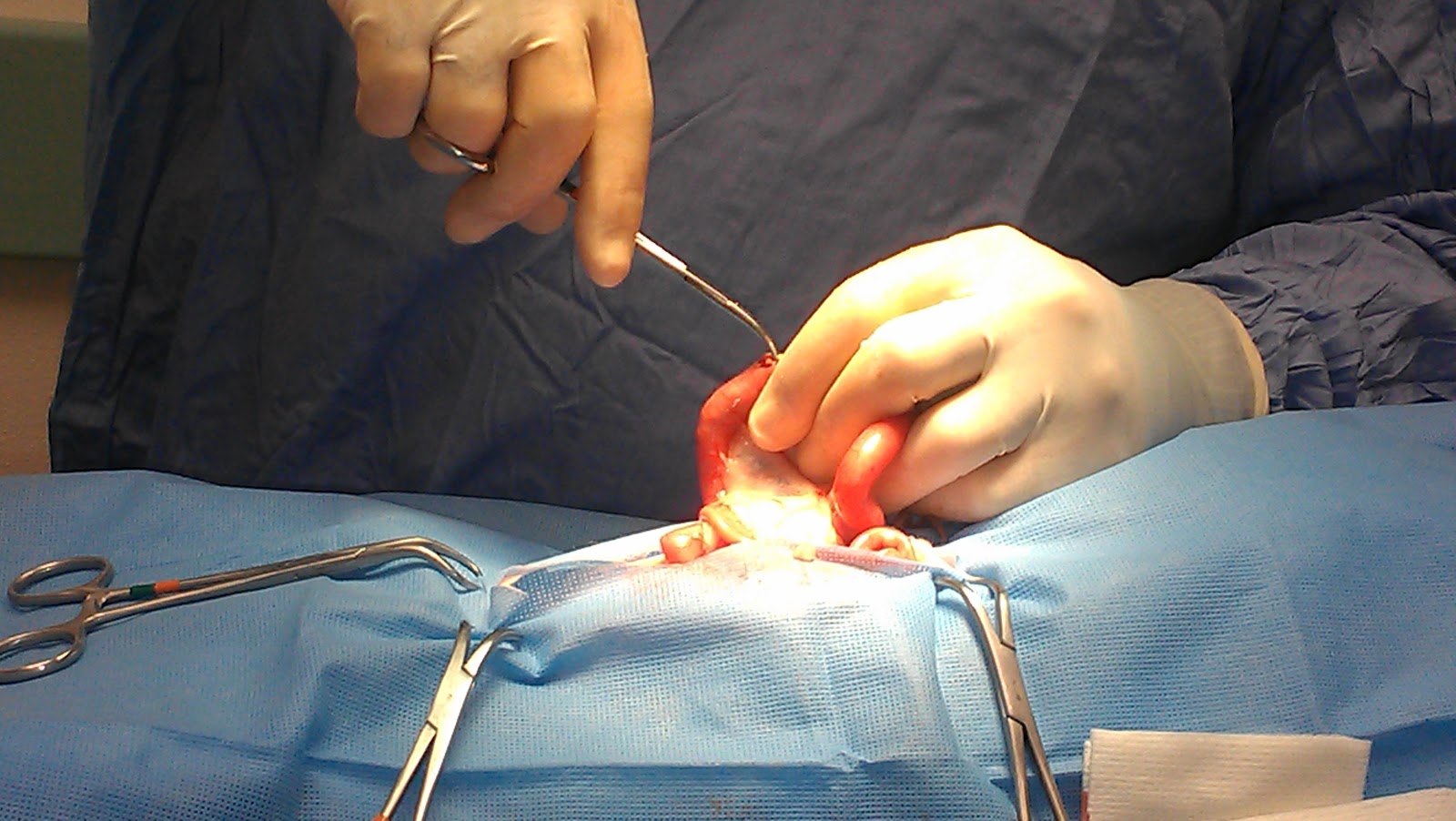 Vinnie’s ultrasound ruled out many underlying illnesses while confirming our suspicion of an
enlarged liver. Unlike an Xray which shows outlines of organs, an ultrasound can image soft tissue organs in three dimensions enabling us to see the texture and dimensions of all soft tissue organs--liver, kidneys, spleen, pancreas, intestines, lymph nodes, adrenal glands,  as well as to evaluate organs in motion ( which is especially important for studies of the heart). An Xray would have just shown us that Vinnie's liver was enlarged, bout would not enable us to know the condition of the rest of the organs. This test is not uncomfortable and does not require anesthesia. 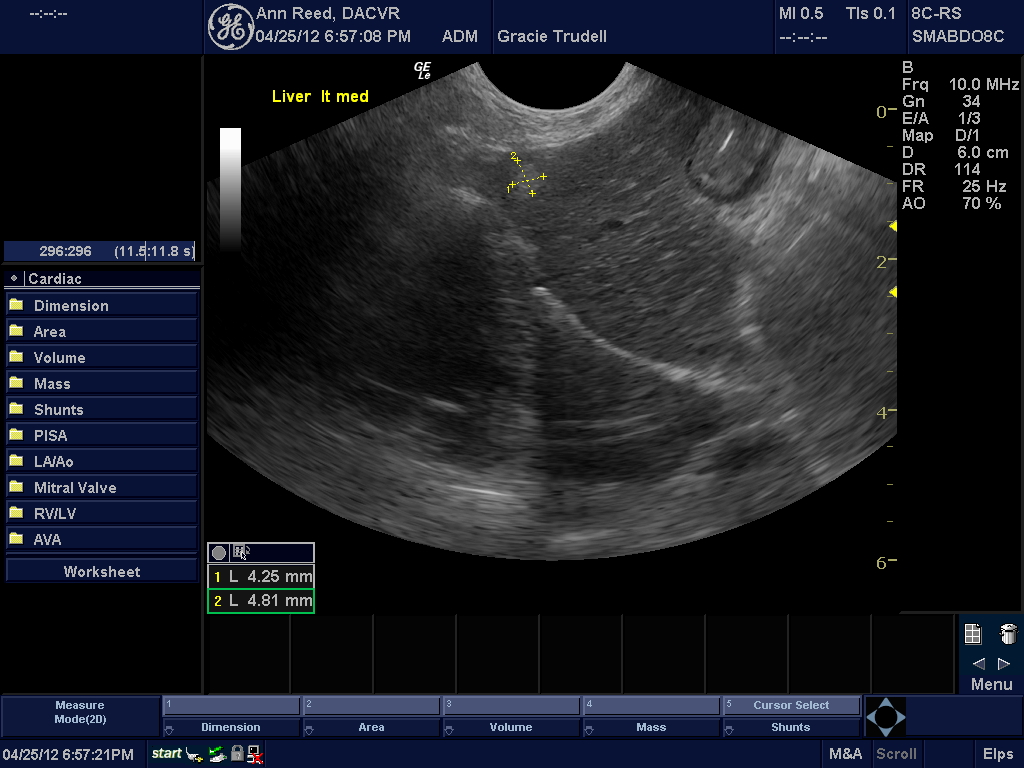 A fine needle aspirate (FNA) was performed with ultrasound guidance. This is a noninvasive test in which liver cells are harvested with a syringe and examined on a slide. The technique, known as cytology is not as conclusive as histopathology or  biopsy, because we examine individual cells and are unable to see how they are arranged. Although not without limitation, cytology  unlike biopsy does not require general anesthesia thereby involving much less risk, as well as costs. 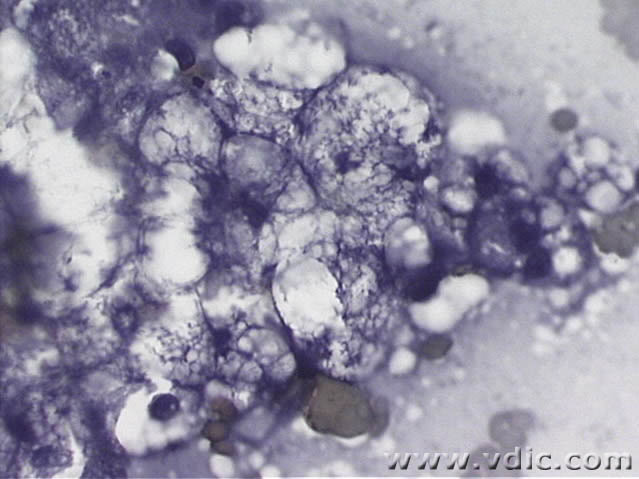 If Vinnie could only have ONE thing, what is the single most important treatment Vinnie must have to overcome his disease?

Vinnie was hospitalized and was given intravenous fluids and medications to control nausea. The medications he was given are listed below with links for more thorough understanding and reasoning behind each

A feeding tube was implanted in his esophagus, which enables aggressively feeding him in spite of him not being interested in eating at all.  The feeding tube also enables easy administration of his medications. It is difficult, if not impossible, to force- feed these patients adequate calories and nutrients to reverse the disease without a feeding tube.

Feeding:
Each day the owner places a can of Science Diet A/D  in a blender and blenderize it into a slurry which is easy to administer through the tube.
http://www.hillspet.com/products/pd-feline-ad-caninefeline-critical-care-canned.html


If you answered feeding tube give yourself 5 points.
Without aggressive  nutritional support it is difficult , if not impossible, to force-feed these patients adequate calories and nutrients to reverse the abnormal metabolic cycle. 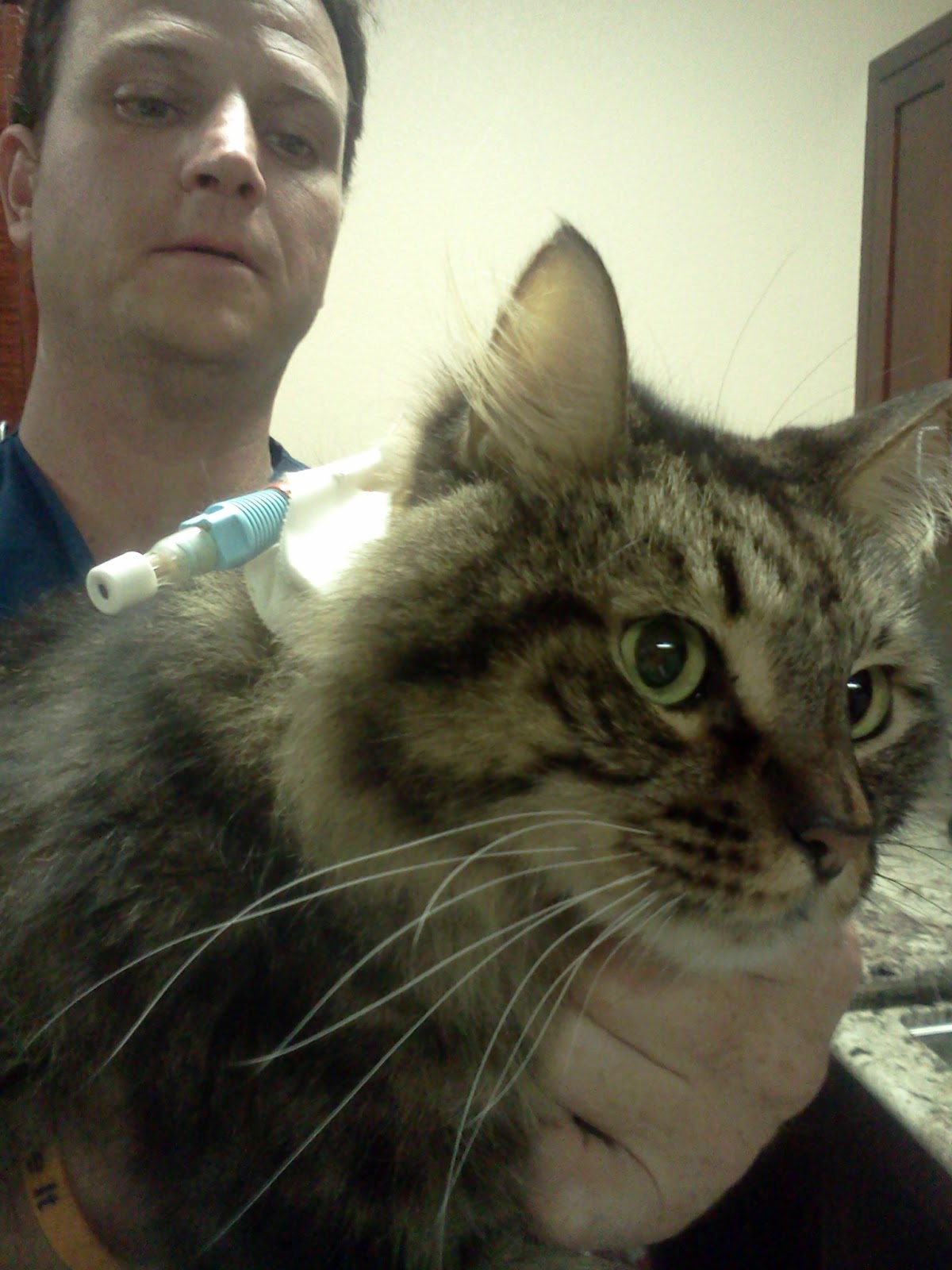 Considering how Vinnie looked a couple of weeks ago, we are pleased with his progress. He is acting more and more like himself every day. Yesterday his mom said he begged for treats for the first time in a long time.


Hepatic lipidosis (HL)  is one of the most common of all cat liver diseases, affecting cats of any age, breed and sex.  Overweight cats are at increased risk of developing HL. Rapid weight loss, loss of appetite, starvation and catabolism are the initiating cause of fat infiltrating the liver.
Similar disease is seen in birds, rabbits, mustelids (mink, ferrets), as well as people in whom it is known as Non-alcoholic fatty liver disease (NAFLD).
Anorexia (loss of appetite) can be caused by changes in diet,  stress, and the underlying disorders listed below.  Inflammatory bowel disease (IBD) is  frequently associated with hepatic lipidosis.

In many cases no underlying cause can be identified and then the disorder is called idiopathic hepatic lipidosis.

The rapid development of hepatic lipidosis in obligate carnivores during fasting could be related to depletion of arginine (an amino acid/ building block of proteins) and the loss of muscle mass due to reliance on gluconeogenesis (http://en.wikipedia.org/wiki/Gluconeogenesis ) for blood sugar provision during food deprivation. Other explanations are altered omega-6 to omega-3 fatty acid ratio and oxidative stress. Mobilization and accumulation of fat in the liver impairs liver function until the liver fails.

If not recognized promptly and treated aggressively, the patient would progress to stupor, seizures, coma, internal bleeding and death.

Fortunately for us Vinnie is getting better. As of yesterday he is no longer nauseous and is beginning to show interest in treats. We are hoping to be able to remove the esophageal feeding tube within a few weeks.

Once he is eating voluntarily we will feed him a meat- only diet, free of grains; especially avoiding the genetically modified corn, whose safety studies leave me entirely unimpressed.

Results of a 90-day safety assurance study with rats fed grain from corn rootworm-protected corn
B. Hammond a,*, J. Lemen a, R. Dudek a, D. Ward a, C. Jiang a, M. Nemeth a, J. Burns b


Clearly this variety of corn with or without genetic modification causes  liver changes in mammals.  It is impossible to tell how much the genetic modification itself contributes to liver toxicity of this corn with a group this small. And I find it curious that in this experiment 80 rats were fed the genetically modified variety but results are only published for 40--this renders any statistical analysis invalid.

Additionally liver toxicity  on the nuclear cellular level leading to alteration of protein expression, related to splicing structures in rodents is associated with  genetically modified soybeans as extensively documented by Manuella Malatesta.

A long-term study on female mice fed on a genetically modified soybean: effects on liver ageing.

Liver represents a suitable model for monitoring the effects of a diet, due to its key role in controlling the whole metabolism. Although no direct evidence has been reported so far that genetically modified (GM) food may affect health, previous studies on hepatocytes from young female mice fed on GM soybean demonstrated nuclear modifications involving transcription and splicing pathways. In this study, the effects of this diet were studied on liver of old female mice in order to elucidate possible interference with ageing. The morpho-functional characteristics of the liver of 24-month-old mice, fed from weaning on control or GM soybean, were investigated by combining a proteomic approach with ultrastructural, morphometrical and immunoelectron microscopical analyses. Several proteins belonging to hepatocyte metabolism, stress response, calcium signalling and mitochondria were differentially expressed in GM-fed mice, indicating a more marked expression of senescence markers in comparison to controls. Moreover, hepatocytes of GM-fed mice showed mitochondrial and nuclear modifications indicative of reduced metabolic rate. This study demonstrates that GM soybean intake can influence some liver features during ageing and, although the mechanisms remain unknown, underlines the importance to investigate the long-term consequences of GM-diets and the potential synergistic effects with ageing, xenobiotics and/or stress conditions.

We hope you did well on the quiz and enjoyed the learning experience.
Give yourself an A if you scored 15 points, a B if you scored 11, a C if you scored 10 or less.
Feel free to ask questions or leave comments, if you like.

Fatty Acid Composition and Development of Hepatic Lipidosis During Food Deprivation—Mustelids as a Potential Animal Model for Liver Steatosis http://ebm.rsmjournals.com/content/234/3/278.full


Vinnie developed an abscess at the esophageal tube site, and it  had to be removed.
Like many dry- food junkies addicted to  carbohydrates, the texture and shape of the kibble Vinnie  refuses to eat sufficient quantities of  canned meat to sustain himself.
It is often very challenging to switch junk-food junkies to healthy foods.
Given the choices we elected to allow him to eat what he will for the time being. The owner  will have to deal with the challenge of switching him to a more appropriate food  later.

Posted by beaachvetlbc at 9:30 PM